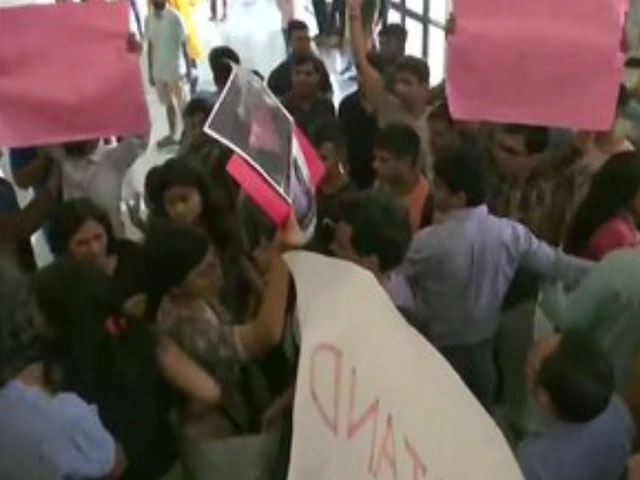 A scuffle broke out between the members of two students’ union groups – All India Students Association (AISA) and Akhil Bharatiya Vidyarthi Parishad (ABVP) – at the Jawaharlal Nehru University (JNU) in New Delhi on Thursday evening during a seminar organised on Article 370. According to reports, an event was organised at the JNU campus where Union Minister Jitendra Singh was invited to deliver a lecture on ‘Abrogation of Article 370: Peace, Stability and Development in Jammu, Kashmir and Ladakh’.

It is being said that some university students resorted to sloganeering during a talk by Union Minister, which was countered by ABVP activists. A section of students raised pro-Kashmir slogans, while ABVP activists countered with “Kashmir se Kanyakumari, Bharat Mata ek Hamari”.

According to news agency PTI, students associated with AISA, a left-wing student organisation started protesting against Singh’s presence in the University and also raised Slogans against the Central government for its August 5 decision to scrap special status of Jammu and Kashmir granted under Article 370.

Soon after the AISA students hurdled outside the Convention Centre of the university, several student supporters of ABVP reached there and began counter protest, leading to heckling and manhandling by rival groups. ABVP is a right-wing all India student organisation affiliated to the Hindu nationalist Rashtriya Swayamsevak Sangh (RSS).